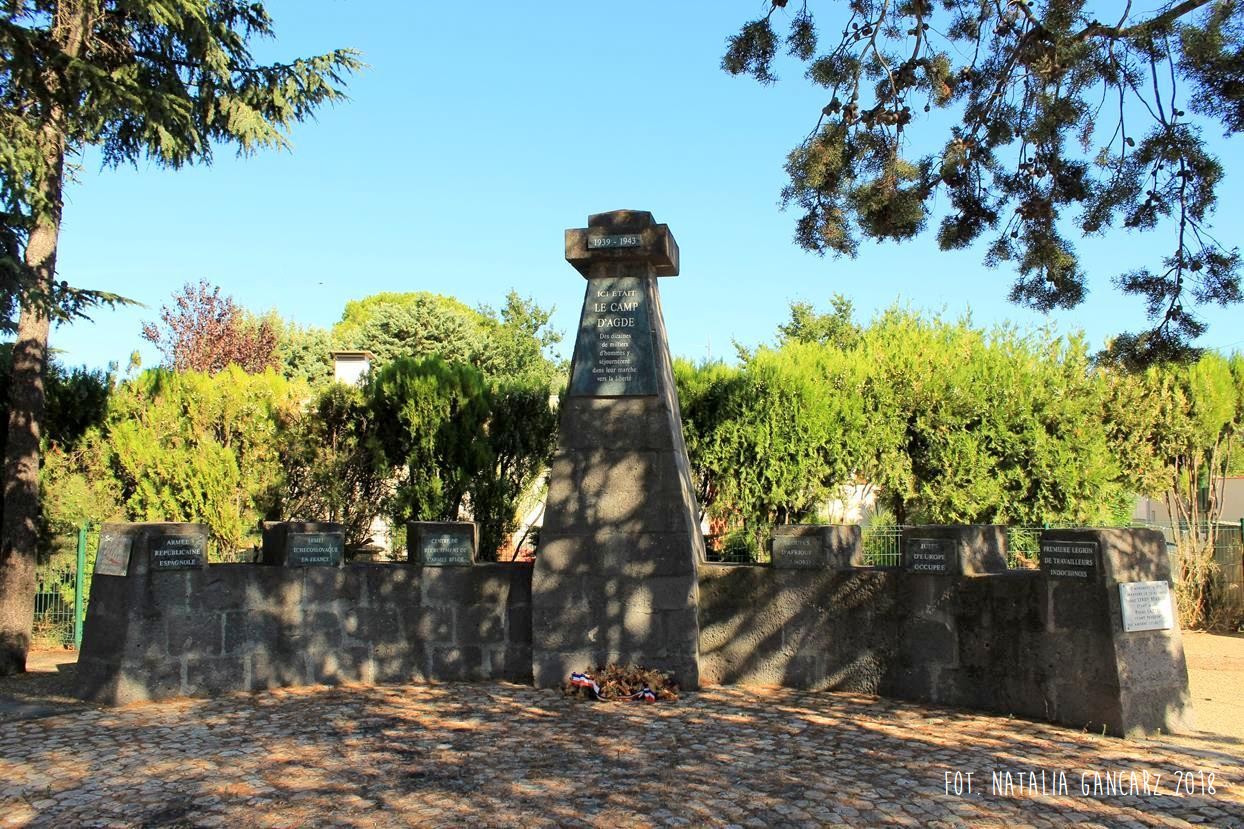 In the city of Agde (Hérault department) there was a refugee camp, which was opened in February 1939 and was originally intended for those participating in the Spanish Retirada, who had previously been detained in Sant-Cyprien (a neighbouring village north of Argelès). Officially the camp was closed in September 1939, but it continued its operation, this time not as a refugee camp, but as a concentration camp. Eventually, the prisoners of this camp included Jews, Gypsies and others. Agde was divided into 3 camps, each with its own police, infirmary and supplies. It was expected to accommodate 20,000 people. In May 1939, the population inside the camp reached its maximum number: 24,224 people.

The camp was finally closed in March 1941.

Today in Agde there are the following forms of commemoration: a memorial, 3 steles with the names of the Righteous Among the Nations which also commemorate the Jewish victims of the persecution by Vichy, and a plaque on the Collège René Cassin building. The name of the square itself is also a form of commemoration. The Izieu Children’s Square, which is adjacent to Collège René Cassin, is located on the site of the former Agde concentration camp. The term ‘Children of Izieu’ refers to children living in the ‘Izieu House’, opened by Sabine and Miron Zlatin. At the beginning of the war, Sabine, who had fled Poland, worked as a nurse near Montpellier, but she was fired from work because she was Jewish. As the law allowed children under 15 to be released from camps in the south of France, provided they had the required permits, Sabine did everything to save the children from Agde, where she worked as a nurse, and from Rivesaltes. In 1943, together with several children, she settled down in Izieu. In the middle of the year there were already sixty children living in the house. Until April 6, 1944, all the people who could tried to help them, e.g. some children were sent to Switzerland. But in 1944, the Germans transported 44 children and several child guardians to Auschwitz, where they were gassed. Miron Zlatin was among those killed. Sabine managed to survive.

The memorial dedicated to the Agde camp is located at the intersection of 7 Fonts road and Jean Moulin street. Built of basalt stone, it symbolically marks the entrance to the camp and commemorates all the prisoners who were detained there. The memorial comprises an obelisk with a cross at the top. On both sides of the obelisk, there is a wall with plaques that commemorate various groups of prisoners.

On the Collège René Cassin building there is a plaque which commemorates all the children from Agde, Jewish and Gypsy, who were killed in KL Auschwitz and symbolically baptised on October 24, 1997 in Agde.

In this place Jewish and Gypsy children were interned by the Vichy regime and its accomplices from September 1940 to August 1942. 120 Jewish and 15 Roma children were saved from deportation to Nazi camps thanks to the courage of Ms. Sabine Zlatin, ”The Lady of Izieu”, who started rescuing children intended for the Holocaust in the Agde camp in 1942. In memory of all the children who never returned from the camps, we will not forget.

The stele and the plaque: