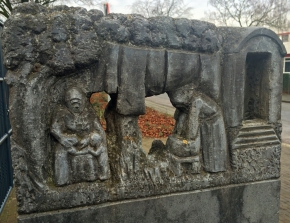 The Gypsy family from Beek was a family of nomads traveling around the fairs with the puppet theatre. The father, Johann, played the violin and sold trinkets; before, he had been a horse trader all his life. The family included parents, Johann and Ernestine Franz, who were over 60 during the occupation, and their children: four sons (Luitz, Hans, Peppi and Eif) and three daughters (Zilla, Medi and Buntl). They lived in caravans in a place that the municipality had assigned them before the war. The children were between 30 and 15 years old. The eldest son, Manella, was married to a Dutch woman and already had two children. He lived separately in the town of Kloostersteeg.

When restrictions were introduced on nomadic Gypsy groups in the Netherlands, in 1943 Johann Franz settled in an empty house in Bocholtz. When they had to leave that place, he returned to Beek, where he rented a meadow for the camp, the so-called Kattewei field.

In 1944, Johann’s eldest son had already moved away to live with his own family. He managed to avoid arrest during a national “raid” on Gypsies, which took place on May 16, 1944 only because he escaped through the window while his Dutch wife, Agnes was trying to stall for time with the police. Until the end of the war, he was hiding in a shed, and he may have also stayed in Belgium.

The Mayor of Beek, who belonged to the party of national socialists, sent two policemen to capture the Franz family and transport them to the Westerbork camp. From there they were sent to Auschwitz on May 19, 1944 together with other detainees. Parents were sent to gas chambers during the liquidation of Zigeunerfamilienlager in Birkenau, on the night of July 31 to August 1. Their children were transported to labour camps.

Brothers Hans and Peppi died in Buchenwald, Buntla, the oldest daughter, died in Ravensbrück. Luitze died in Sachsenhausen. Three of the youngest children: daughters Zilla and Medi and son Eif returned from the camps.

Near building No. 60 at Stegen Street in Beek, next to one of the gates to the cemetery – but also near the Kattewei meadow, where the Franz family camped, there is a memorial dedicated to the deportation of the Franz family from Beek to Auschwitz. The memorial has the shape of a plate (standing vertically), the upper part of which is a sculpture depicting a gypsy “pastoral scene”: a man playing the violin and two girls dancing under a spreading tree nearby. On the left you can see the entrance to the gypsy wagon, which is also very symbolic: the door is also a hole in the stone, using the steps you can enter the wagon, which at the same time is getting blurred towards the top.

We let them leave

The city of Beek

On Stegen Street, opposite the ”De Kring” Primary School, next to one of the cemetery gates; close to Kattewei