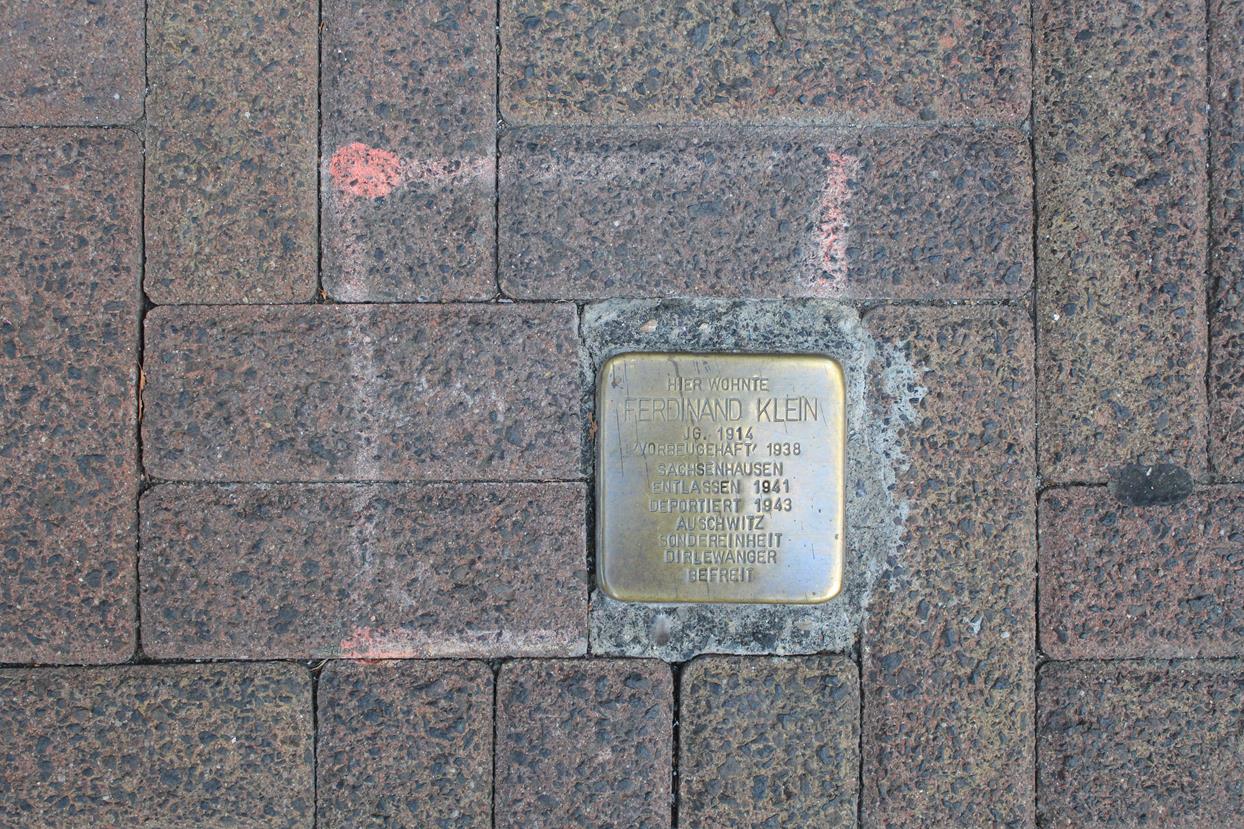 The last flat in which Ferdinand Klein’s family (a Yenish family) had lived before the war was at Löwengasse 23. Today, more or less in this place there is a shop, so it was decided that a stolperstein would be placed in front of another building which stands in the spot where part of the Klein family lived after the war.

Ferdinand was a doorstep salesman – he was on the road from May to October. He was first detained in 1934, at the age of twenty, as a political prisoner. He was sent to the Osthofen camp near Worms. After being released from the camp, he returned to his parents, to Gießen, but in 1938 he was arrested again with two relatives who were not Yenish. The relatives were released and Ferdinand was sent to the Sachsenhausen camp. In April 1941 he was released from the camp. Apparently it happened because he asked for mercy for his mother. When he returned, he was even drafted into the Wehrmacht, but he was dismissed from service as a “Gypsy half-blood.” On March 16, 1943, along with his entire family of 14, mostly children and young people, he was arrested and taken away with the first transport to KL Auschwitz. Ferdinand Klein survived. The list of deportees’ names which is in the possession of the city archives was the starting point for the city authorities, who intend to officially designate the 16th of March as a Gießen Gypsy Memorial Day.

A few weeks later, at the beginning of May 1943, another transport including the Sinti departed from Gießen. Klara and Peregrinus Mettbach with her daughter Maria were among the deported prisoners. Their second daughter, Anna Mettbach, died on November 23, 2015. She was a Sinti known not only in Gießen, but also around the world. She was one of the participants of the German Sinti movement, fighting to commemorate the Gypsy genocide.

Ferdinand was a fighter. In 1938, he won a district court case on his motion in which he stood against a wrongful arrest of “independent Gypsy traders.” The problem was that they were arrested based on the right to regulate problems with anti-social individuals, but Klein managed to present the senselessness of this reasoning.

A stolperstein dedicated to the memory of Ferdinand Klein is located in front of a contemporary building No. 9 at Mühlstraße. This is the first commemoration of a Yenish!

It is a 10×10 cm brass plate embedded in concrete between the pavement’s concrete slabs. A German-language inscription was punched on the plate, according to the original idea of Gunter Demnig, who places this type of „stumbling stones”, Memorial Stones, all over the world.