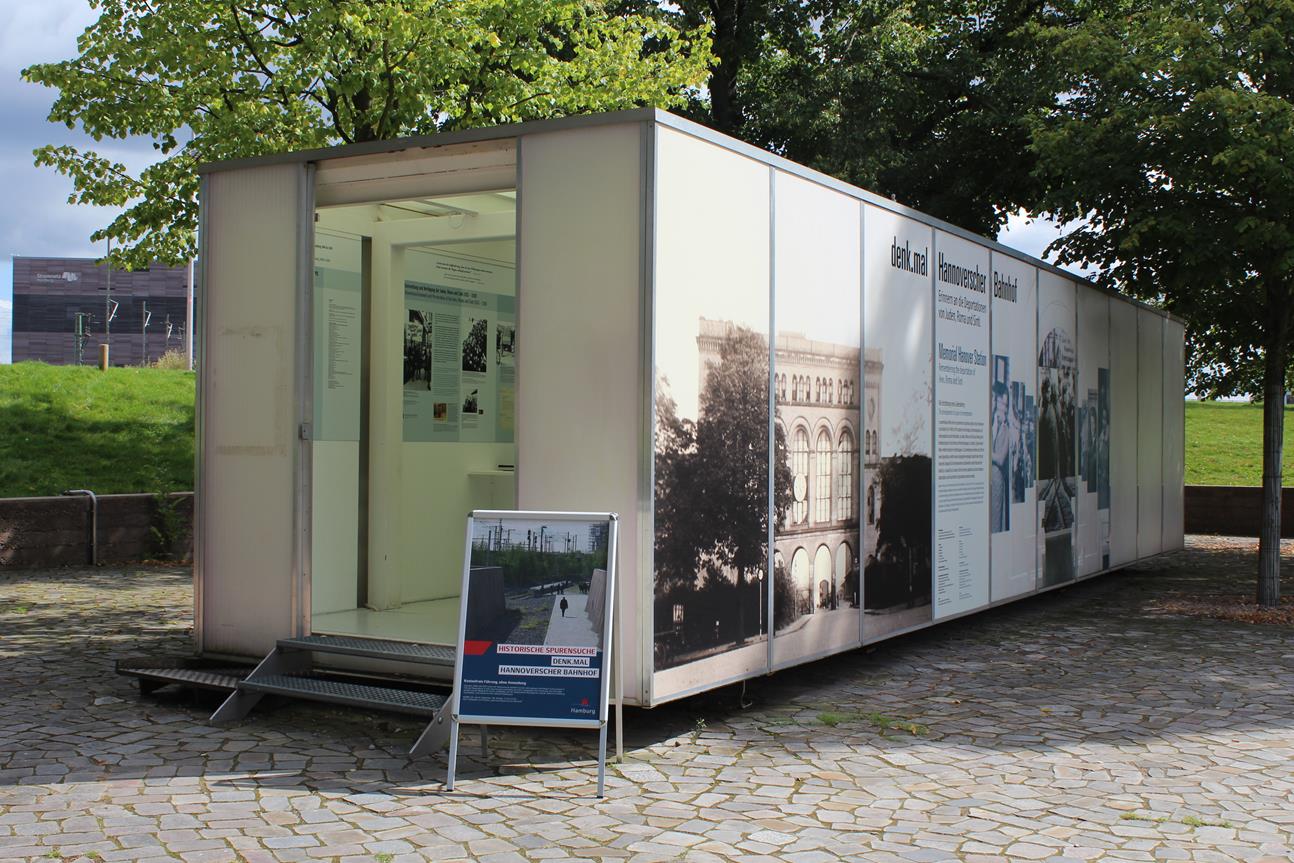 A white connex container was placed at Lohseplatz, the former Hannover railway station. Inside the container there is a board exhibition that presents copies of transport documents. The exhibition is devoted to 20 deportations of Jews and Gypsies that took place in 1940-1945 from the Hannover Railway Station. The text outside the container presents the “history of commemoration” – that is, it outlines a plan to erect a memorial and a documentation centre in this place.

The exhibition is open from April to October, whereas in the remaining months it can be visited by appointment only.

The exhibition presents the fate of Jews and Gypsies, from persecution in 1933 to the outbreak of war, followed by individual deportations (including the deportations of Jews to the Litzmanstadtgetto – the ghetto in Łódź; , and to Minsk, Riga, Terezin, as well the Roma and Sinti transports to Bełżec and Auschwitz-Birkenau). At the exhibition you can see the personal stories of people and families, information about the subsequent years of persecution, including the activities of the criminal department of the police, as well as deportation lists – including scans of full lists of all deportations, available as separate notebooks.

The last board shows the history of the construction of the memorial site – the Lohseplatz complex, which consists not only of a memorial (a competition for the design of the memorial and general land development was announced in 2009-2010), of the exhibition in a connex container, and the plaque dedicated to the Roma and Sinti, which is especially important to us. We will also find information about a number of activities related to the topic of deportation and the Holocaust, including a film ”How do you want to remember?,” workshops for young people, short video clips about the memory of the events of World War II and how the memory of National Socialism relates to the „present”. Even a hip-hop song was created by young people from Hamburg, as part of the commemoration project. The song is their response to the history of deportation – a response combining the memory of victims as well as perpetrators and bystanders.

Experts from numerous institutions around the world took part in this memorial project and in the preparation of the exhibition, to name just a few: KL Hamburg-Neuengamme Memorial, KL Auschwitz-Birkenau Museum, Holocaust Memoriam Museum in Washington, Yad Vashem and many others.

In German and English