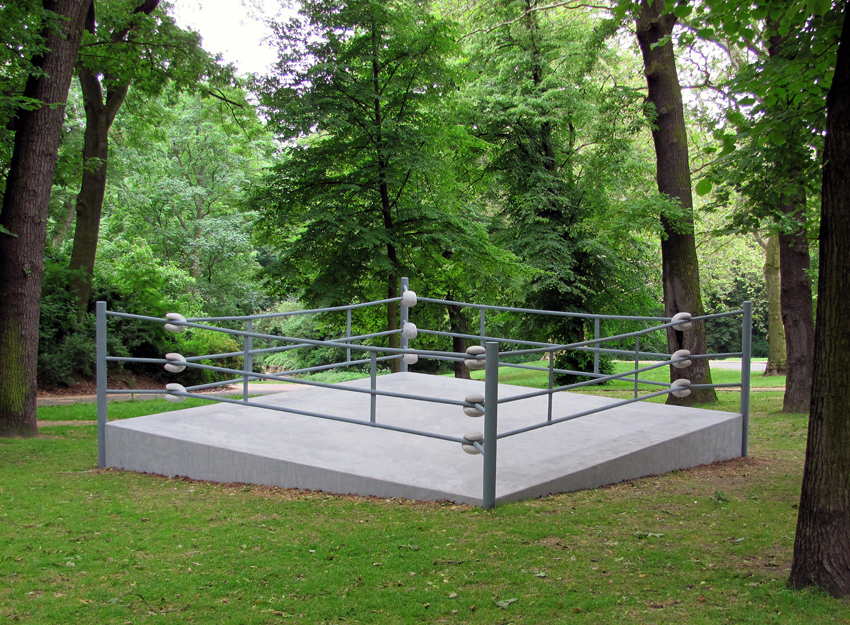 Johann “Rukeli” Trollmann *, Sinti, born in 1907 in Wilsche near Hanover. He owes his Gypsy name, derived from ruk – ‘tree’  to the fact that he was tall as a boy and was known for his perfectly straight posture. Having achieved numerous successes as a boxer, at the end of the 1920s, he decided to turn professional. In the early 1930s, “Rukeli” was one of the best boxers in light-heavyweight in Germany. He participated in the fights organised at the historic Rote Flora theatre in Hamburg (this building today features the Stolperstein dedicated to his memory). In 1933 he became a German boxing champion. He was known throughout the country as a “dancing boxer”, but his ethnic origin became a reason for persecution. For instance, he was forced to fight like „a white man” – i.e. to give up his “dance” in the ring and just stand still. He continued to win. Since he was expected to behave like „a white guy” – he dyed his hair and stood to fight with a whitened face, which, as an act of open provocation, caused him enemies among the ranks of national socialists. He was quickly stripped of his title and finally was banned from boxing.

In 1935 he met his future wife Olga Frieda Bilga. Soon after that their daughter was born, but in 1938 Trollman was captured and locked up in the Hannover-Ahlem labour camp for several months. After being released, he was hiding, but in 1939 he was drafted into the Wehrmaht, and as a part of his infantry service he was stationed in Poland, Belgium and France until spring 1941, when he was sent to the eastern front. He is reported to return  in 1942 as a wounded man. According to other sources, he was released from the army for racial reasons. Soon, in the same year, he was sent to KL Neuengamme near Hamburg. He was quickly recognised and was forced to secretly train German guards at night. Forced labour during the day, hunger and night fights quickly affected his health. A group of prisoners managed to fake his death and smuggle him under a false identity to the neighbouring Wittenberge camp, which was a sub-camp for Neuengamme. Unfortunately, he was recognised there too. Probably the prisoners got him into a duel fight with a hated capo and former criminal Emil Cornelius. Even weakened, Trollmann won the fight, but the kapo killed him shortly after – according to one version Cornelius murdered him personally, knocking him to death with a shovel when he was returning after a full day of work.

The official cause of Trollmann’s death was reported as cardiac arrest, which allegedly happened on February 9, 1943 in KL Neuengamme. For the second time, this time for real, he was murdered in the Wittenberge sub-camp in 1944.

It was not until 2003 that the German Boxing Association returned Trollmann to the title of German Champion from 1933, and offered his family the championship belt.

The story of “Rukele” became a source of interest for the movement of artists from Berlin and Dresden called Bewegung Nurr. They dedicated to him a several-year-long project called “9841”, because this was the Trollmann camp number from the Neuengamme KL. As part of their activities, a website dedicated to the project was created. It contains Johann’s biography and documentation of the implementation of the 9841 project. The most important part of the project was the construction of a temporary memorial dedicated to the boxer.

The temporary monument / sculpture was exhibited from June 9 to July 16, 2010 in Viktoria Park in Berlin, then it was on display from May 12 to June 24, 2011 at Ballhausplatz in Hanover and from October 19 to December 16, 2012 in Hellerau – Europäisches Zentrum der Künste in Dresden.

Each side of the ring is 5.6 metre long, and each side of the actual fighting arena, without the ropes – 4.6 metre long. The highest point of the elevated fighting surface is at the height of 1.22 m above the ground, but according to the creators’ unusual concept, the surface of the ring is askew at 5%. Thus, one of its corners almost reaches the ground, whereas  the opposite corner is 1.22 metre high. The height of the whole memorial, including corner posts is  3 metres at the highest point.

The lopsided surface of the ring gives us the opportunity for better observation, but it is also symbolic, as it can be connected with National Socialism, which deprived Trollmann of everything – his title, profession, family, and finally, his life. This ideology dumped the champion from the ring. And his fate is the fate planned for all the Roma and Sinti.

In one of the corners there is the inscription “9841”, which is the name of the project and refers to the number given to Johann “Rukele” Trollman in KL Neuengamme.

The temporary monument / sculpture was exhibited from June 9 to July 16, 2010 in Viktoria Park in Berlin, then it was on display from May 12 to June 24, 2011 at Ballhausplatz in Hanover and from October 19 to December 16, 2012 in Hellerau – Europäisches Zentrum der Künste in Dresden.

Currently the memorial is not on display.