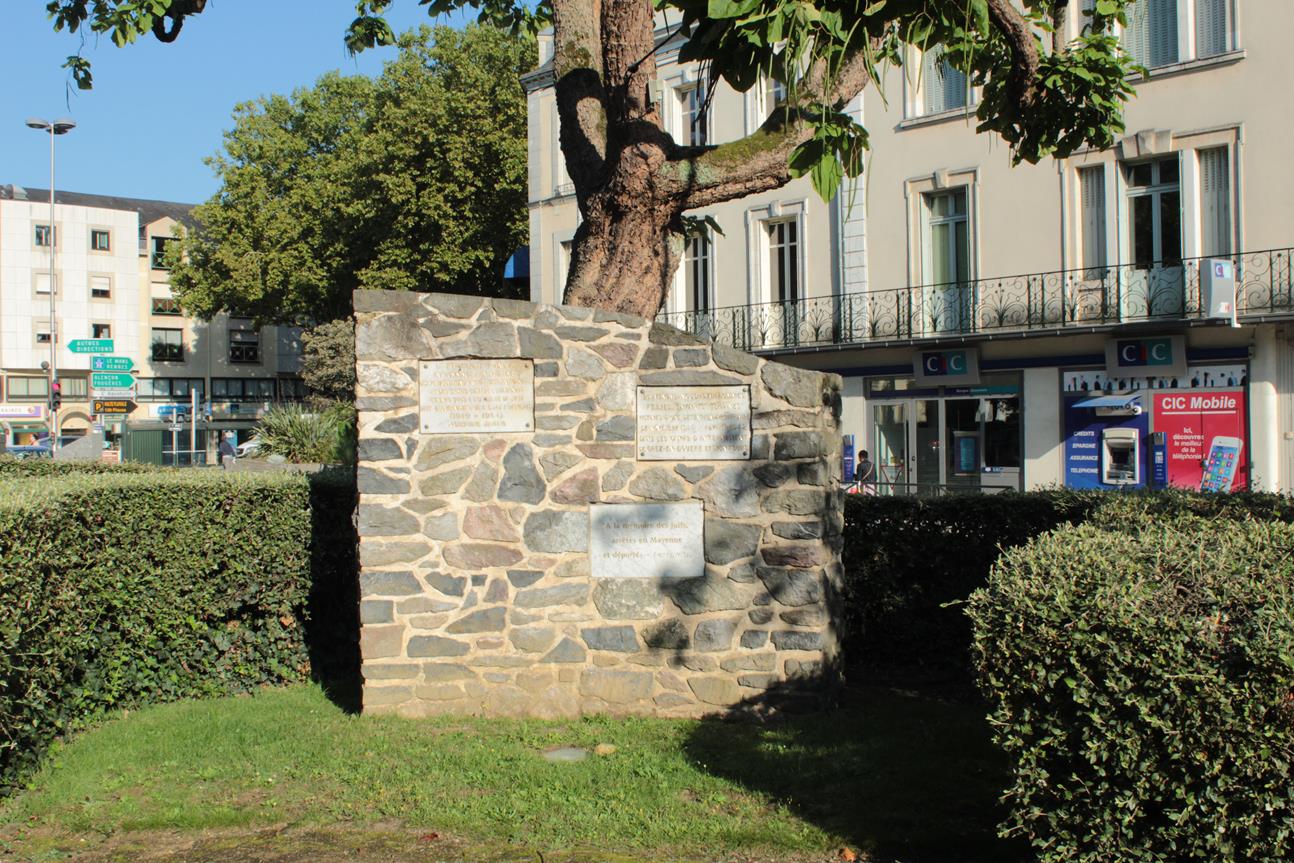 Between 1940 and 1942, Gypsies from this region were interned in two camps: Grez-en-Bouère and Montsûrs. The memorial commemorates them, as well as other victims of the German occupier and National Socialism and the occupier.

At the main square of the town, at Place du 11 Novembre, near Rue de Strasbourg – a small square, called Square Marechal Foch, was separated and fenced. Several monuments have been collected in this area, thus creating a kind of Memorial Park.

Entering the main gate from the town hall parking lot – we head left. Under a large catalpa tree stands a memorial in the form of a stone wall, over two meters high, arched on the right. The right side of the wall is 1.67 m high, whereas the left side is 2.10 m high. The wall is about 45 cm thick. The stones that were used to build it come from the Montsûrs quarry, , in which workers during the World War II also included Gypsies.

There are 3 plaques of white marble placed on the wall. They bear inscriptions in French, sandblasted and covered with golden paint. A simple sans-serif font and small caps were used for the inscription on the two upper plaques, whereas the lower plaque has an inscription in the basic type in the Times New Roman typeface or similar. The bottom plaque commemorates solely Jews arrested in Mayenne and deported to Auschwitz. In turn, the inscriptions on the upper plaques (the one on the left devoted to victims in general left, the one on the right also includes Gypsies) are quoted below.

While the plaque on the left has a universal text that was placed in most cities in France to commemorate the victims of World War II, the other two plaques are aimed at commemorating the local victims. The “universal” plaque and the plaque devoted partly to Gypsies were placed on the memorial immediately in 1993, the plaque dedicated to the Jewish victims was added in 2010, thanks to the efforts of Abraham Friedman, a survivor of Auschwitz.

The French Republic pays homage to the victims of persecution and anti-Semitism as well as crimes against humanity committed during the times of the so-called “Government of the French State” in the years 1940-1944. We shall never forget.

Let us remember the Gypsy men, women, and children – victims of forced detention from November 1940 to February 1942 in internment camps in Grez-en-Bouere and Montsûrs.

Technical staff of the city hall

The City of Laval