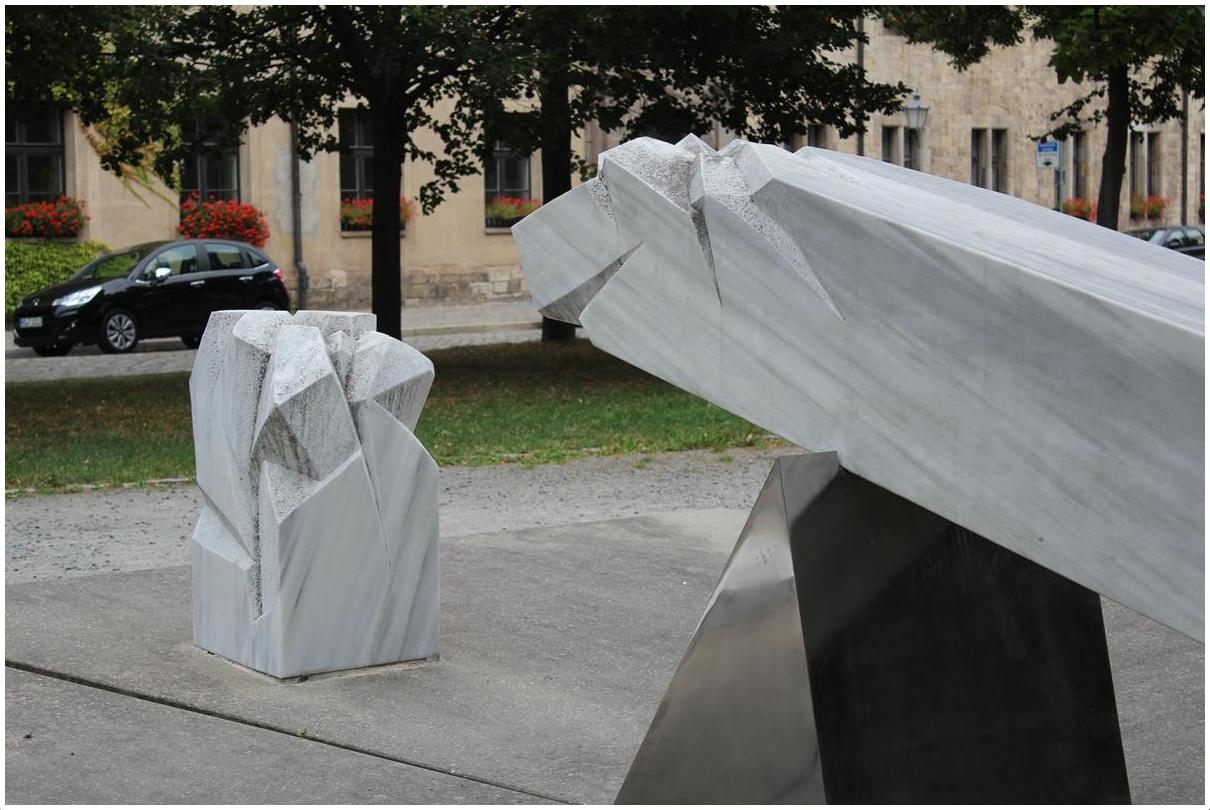 From 25 to 27 October 1939, Gypsies from Magdeburg were gathered and sent to Zigeunerlager in Holzweg near Neue Neustadt. This camp was closed in 1943, and 470 men, women and children from Magdeburg were transported to Auschwitz-Birkenau on 1 March 1943.

Work on the Denkstein memorial in Magdeburg began as early as 1990. The unveiling of the memorial took place eight years later.

A marble block measuring 50 x 50 x 150 cm emerges from the concrete base of the monument (7.00 x 6.50 m). In the central part of the base plate there is a stainless steel prism, which stands where the base plate is divided into parts. Part of the broken marble block (approx. 5 m) is supported on a steel element.

The author interprets his project comparing a broken column to cutting off the Gypsies from their former lifestyle and tradition, the interrupted life of many Gypsy families, to the genocide of the whole society. However, the memorial also symbolises the hope for survival – which is hinted in the floral elements.

On the left side of the base pedestal there is a marble plaque with a carved inscription. In the lower right-hand corner, there is the artist’s name plate embedded vertically.

In a sense, the memorial is a complete set with the tomb of the Rose family, located at the local cemetery in the northern part of Magdeburg, in Neustädter Friedhof, at Lübecker Straße. Buried there are the following persons: William Rose (born on 27 April 1882, died on February 24, 1942), Fritz Rose (born on November 30, 1919, murdered on June 20, 1942) and Emil Rose (born on April 15, 1922, murdered on June 20, 1942). Both memorials are supposed to remind us about crimes against Roma and Sinti.

(To commemorate the Sinti and Roma from Magdeburg, persecuted and murdered in the years 1933-1945. They were victims of the genocide in Auschwitz and other extermination camps)

The corner of Hegelstraße and Am Dom (next to the Cathedral)