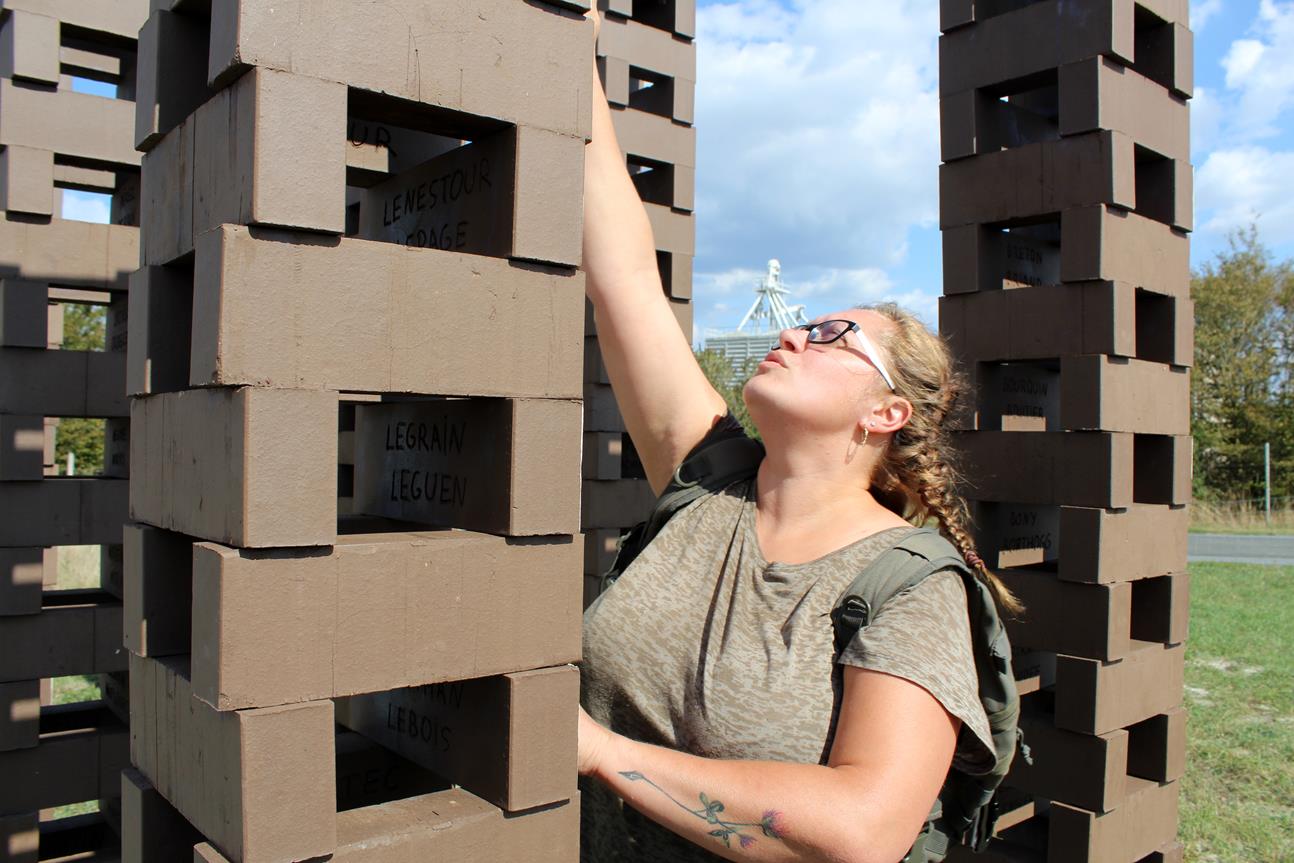 As early as 1980s, a local teacher and historian Jaques Sigot, who learned about the history of the camp only a year earlier – tried to restore the memory of the victims and bring back the knowledge about the existence of the Montreuil-Bellay concentration camp (Maine-et-Loire district). At that time, there were slightly more remains of the camp structures, but they were deteriorating quickly, and on various occasions (e.g. road repair) – more and more remnants were torn down.

Each year Sigot organised memorial meetings at the camp, attended also by former prisoners and their families. Eventually, in 2011, a simple stone stele was erected. Thanks to the activities of the association founded to promote the memory of Montreuil-Bellay another memorial – an artistic installation of ceramics could also be built. It was unveiled in 2016 by French President François Hollande. In a speech during the unveiling, he said that France took responsibility for what had happened to its citizens during World War II and although the persecution of Gypsies had not had the scale of the campaign imposed by the German occupier, Gypsies also suffered significantly in France. He also added, that the victims of the camp including the following ethnic groups: Mânouches, Gitani, Roma, Sinti, Yénishes, and went further to explain that calling them “nomads” was absolutely undesirable.

However, the Montreuil-Bellay camp still functions in general memory as an internment camp, not a concentration camp – to emphasise that it differed from German camps. It is also one of the domains in which Jaques Sigot is trying to act – according to him things should be named by their true names. Although the camp had only features of a place of detention and separation from the rest of society, some documents preserved to this day bear the seal of a “concentration camp”. WSTAW PIECZĘĆ: https://sensdessous.wordpress.com/2013/03/18/jacques%E2%80%88sigot-la-seconde-guerre-mondiale-en-grands-deplacements-sens-dessous-social-et-politique/

A black, stone (perhaps basalt) stele faces the D347 road, not far away from the place where the road forks towards Méron. An orange granite plaque (densely dotted in black, making it hardly decipherable) was bolted to the stele. The plaque bears an inscription in French, written in sanded and gilded lettering. This is the second plaque bolted in this place, as the first, metal one, has been destroyed.

The second (chronologically speaking) memorial is an installation consisting of eight pillars, reminiscent of chimneys of the same height, i.e. 2.70 m. The chimneys are made of loosely laid bricks (arranged by two at each level, they touch one another at the ends). Up to the height of human sight – there are the names of 473 prisoners of the camp, which were carved on the inner surfaces of the bricks. The bricks facing the road to Méron are covered with colourful paint. On the opposite side, i.e. the side facing the area of ​​the former camp – the artist used brick ends to build a structure resembling a half globe (actually it looks like a slice of the Earth with the North Pole cut off from the rest more or less in the place where the Tropic of Cancer circles the globe). The protruding circular structure is located in the middle of a white square surface covered white pebbles – which makes it look like an eye. The top of this slice of the globe is covered with blue enamel, in which clouds are reflected. Around the mirror blue coating, on an orange-glazed circle made of arched bricks, the author carved a brown-coloured inscription in French which resembles  handwriting.

A fact worth mentioning: in the restored and normally locked basement preserved at the territory of the former camp, a Gypsy surname has been preserved, scratched on the wall: Reinhardt. The same name was also scratched (probably some child left a “souvenir”) on the basalt stone stele. “Hooliganism” in this special context can really give food for thought.

This is where the Montreuil-Bellay international internment camp was located. It is here that several thousand Gypsy men, women and children suffered as victims of forced detention in the period from November 1941 to January 1945.

Freedom is the heart of a man who continues fighting despite the worst of the fates. / Tikno Adjam (Romani: the ‘small Adjam’), a Gypsy poet who was interned at the camp.

November 23, 2011 – the stele (I also found information that the first unveiling took place in January 1988 and in year 2011 the stele was unveiled after installing the new plaque; unverified information)

Armelle Benoit – the memorial made of ceramics

Unveiling of the memorial in 2016: http://www.gouvernement.fr/partage/8397-l-hommage-national-du-29-octobre-2016-a-montreuil-bellay