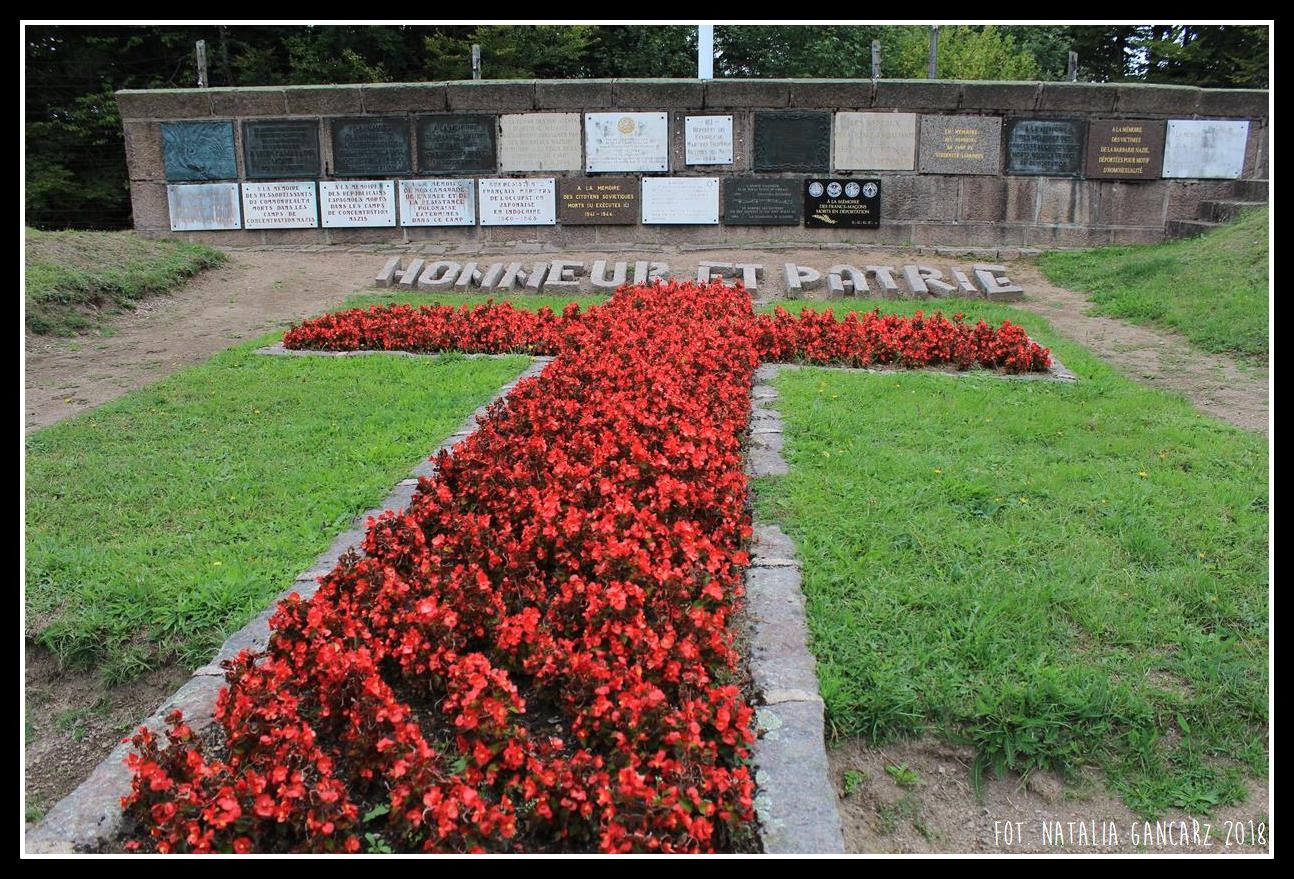 The Struthof camp was located on a mountain slope. The lowest part was occupied by toilet barracks, but when the mortality rate increased in the camp – a crematorium was built slightly above this place, and the lowest part of the camp area was used as a dump for ashes from the crematorium. In November 1944, when the camp was liberated, it was transformed into a penitentiary centre. The so-called “ash pit” was then separated from the prison by a fence. The relatives of the victims who died inside the camp began to commemorate their dead by putting temporary crosses and plaques. Finally, during the work on transforming the former camp into a memorial and museum, Bertrand Monnet designed a basin which contained human ashes in a low rectangular frame, covered with grass. Inside the frame, granite cubes were assembled to form the shape of a cross with flowers growing inside. Around the grave there is a “moat”, a pedestrian path from trodden down and hard soil. Above the cross, on the border between the camp and the forest – a memorial wall was built. It is a stone wall with a simple cross made of steel pipes covered with white paint. On the wall, there are plaques commemorating individual groups of prisoners of the camp, including Dutch, Norwegians, Poles, Spaniards, Slovenes, Roma, members of the resistance movement, veterans, deportees to other camps, homosexuals.

Above the cross of flowers and the mass grave marked with stone cubes, one can see the following inscription: “Honneur et Patriae” (French “Honor and Fatherland”), with another inscription below the cross and the grave: “Ossa humiliata” (Latin “humiliated bones” [? – note by NG])

During the unveiling ceremony of this most important memorial on the site of the former camp, on July 23, 1960, General Charles de Gaulle, then President of France (and the leader of the Free France movement during the occupation) bowed his head over the words immortalised on the central plaque: “Here lie the ashes of the unknown martyrs, victims of Nazism. ” Today, the memory wall is filled almost completely, currently it features 22 plaques, and there is room for 3 or 4 more plaques. It is interesting that the latest plaque is dedicated to the memory of the deceased and deported French Freemasons (the first commemoration of this type that I encountered during this project – NG).

This memorial in the former Natzweiler-Struthof camp – the “moat of ashes” is not only a commemorative site, but also a special place of religious reflection.

The plaque dedicated to the Roma is embedded as the first from the left in the bottom row. It contains no information about the date when it was mounted, there is only a gilded inscription in French carved in white marble.

To commemorate our brothers Gypsies, who were exterminated at this camp.