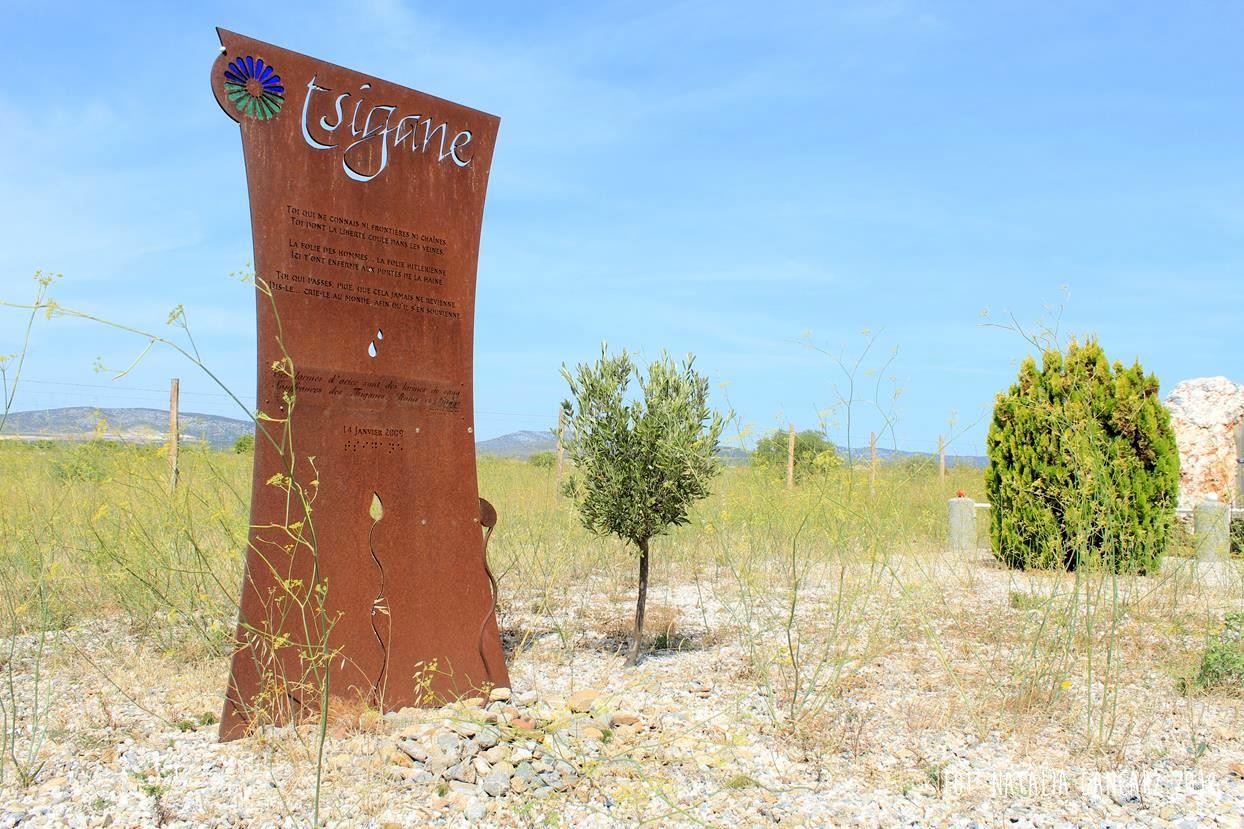 The stele that commemorates the Jews deported from the Rivesaltes camp to Auschwitz was erected in 1994. Another stele, dedicated to the Harkis was unveiled in December 1995, and in 1999  yet another stele was erected in tribute to the Spanish Republicans. After a period of political turmoil, a special commission was created to work on establishing a memorial. In January 2006, architect Rudy Ricciotti, supported by Passelac and Roques, won the international architectural competition – but he did not live to see the opening of the memorial building in 2015.

On the opposite side of the Joffrey Camp (about 4 km by car – detour) there is a complex of memorials, including a very characteristic plaque made of Corten steel, dedicated to the Gypsies.

By the road number D5, among the complex of memorials that commemorate internees in the Rivesaltes camp – the second memorial from the left is dedicated to the Gypsies.

The metal slab in the shape of a narrowed rectangle (towards the hourglass) is slightly tilted backwards. The inscriptions are made of letters cut out through the entire thickness of the Corten sheet. The largest inscription at the top reads “tsigane”, and on its left there is a Gypsy wheel in the colours of the Roma flag, consisting of two stained-glass windows in blue and green, embedded in a metal frame. Below, there is an inscription in French, with two teardrops cut out in the metal slab.

Below is the inscription engraved in the metal surface with a handwritten font, and underneath it there is the date of the unveiling of the monument: 14 Janvier 2009 (even  lower there is also an inscription “tsigane” in Braille). Even lower, there is a hole in the metal slab cut out in the shape of a delicate flower bud on a wavy stem. The flower, cut out of sheet metal, is attached to the monument, as if growing out of stony soil.

The inscription at the top:

You, who knows no borders and no chains,

You, in whose veins freedom flows,

Imprisoned you here, behind the doors of hate.

You, who are passing by, pray so that those days never return.

Say it, yell it to the world so that it remembers.

Those teardrops, cut out from the sheet steel, are the drops of blood of the Gypsies, Roma and Gitani who suffered here. (André Ruellan & Joseph Soler)