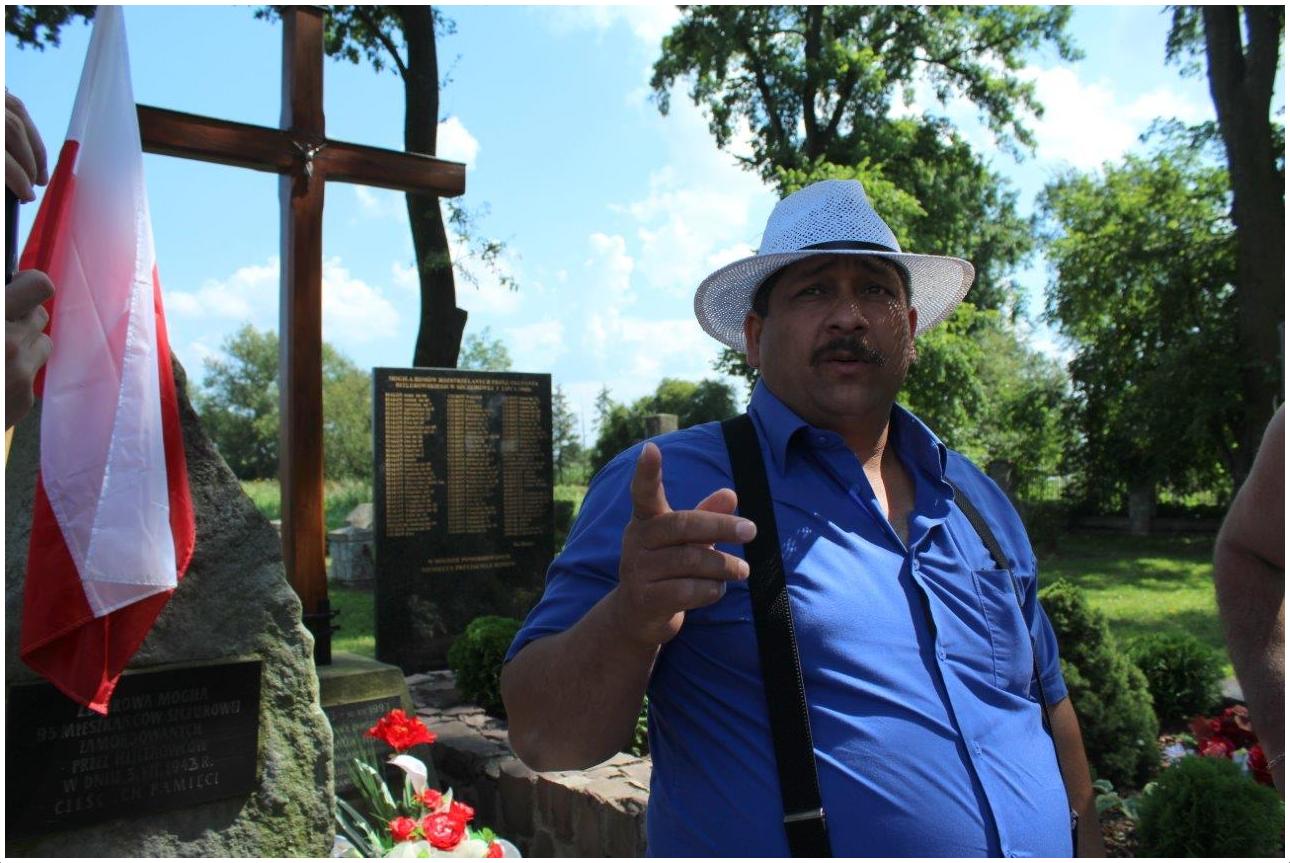 The first Roma recorded in the local parish book of Szczurowa, appeared in the 1820s. They were mainly from the Cioroń and Białoń families, living in a poor settlement situated at the end of the village, at the so-called ”Na Włoszynie”. They were integrated with the local population to such an extent that in the interwar years there were mixed marriages in the village. Among the Roma who lived in Szczurowa there were blacksmith as well as musicians, who were invited to weddings and parties. The Roma helped the local peasants in the field work, they also lived on what they begged from local farmers. Up to a dozen Roma families lived in Szczurowa until 1943, a total of over a hundred people. On July 3, 1943, almost all of this community was murdered when the German police shot 93 Roma at the local cemetery. The Roma settlement had been surrounded on that day in the morning, and Roma were taken on the wagons which belonged to local peasants. They were transported to the place of execution, and the wagons filled with them passed through the whole village. Local people tried to dissuade the Germans from murdering everyone, they managed to trick several people out of this deadly transport, including Krystyna Cioroń, a few years old, who later, as Krystyna Gil (after her husband), repeatedly participated in the Tarnów International Roma Memorial Caravan – a memorial pilgrimage.

The monument in Szczurowa is undoubtedly the first memorial in the world erected to commemorate the Roma Holocaust. It is also probably the largest collective grave of murdered Roma within the current borders of Poland. The inscription on the stone only mentions that the murdered people were residents of Szczurowa. There is no mention of the fact that they were Roma, which may indicate strong identification with the murdered, and certainly – a large acceptance of their presence in the village. The memory of the murdered is still vivid in Szczurowa to this day, it is an important element of the historical awareness of the village inhabitants.

There were also many Jewish families in Szczurowa, who were also murdered, but the memory of them is not as clear as that of the local Roma. The extermination of Jews from Szczurowa took place somewhere far away, they were taken to the ghetto and from there transported to death. The Roma, on the other hand, were transported through the village in broad daylight and in front of all the inhabitants. They were shot almost in the presence of their neighbours, as shots from the cemetery were heard in the most distant place of the village, and the bodies of the murdered were buried by local firefighters who were forced to go to the cemetery by the Germans.

The names of the murdered were recorded in the same parish books, in which their baptisms and weddings were previously recorded, and where the priest recorded the deaths of their previously deceased kin.

From the 1960s, the Roma from Tarnów came to the Szczurowa cemetery to pay homage to the murdered, walking the route from the place where the Gypsy settlement was located to the cemetery. These pilgrimages were carried out irregularly, until in 1996 the Tarnów museum Memorial Caravan came here for the first time and chose Szczurowa cemetery as its final destination. The International Roma Memorial Caravan has become an annual event commemorating the martyrdom of the Roma. The residents of Szczurowa, representatives of local authorities, media, diplomats and Roma from various countries meet at the grave of the murdered Roma from Szczurowa.

At the parish cemetery, at the place of execution of the Gypsies, there is a well-kept, wide grave, in which the bodies of murdered Roma are buried. The grave is framed with stones, just like the one in Pilica.

In May 1956, on the initiative of the local population and combatants, a large granite boulder was placed next to the grave with the appropriate inscription. Fifty years after the execution, in 1993, a cross was placed next to the boulder and a plaque was added at the bottom of the cross. In 2012 a plaque with the names of the victims was unveiled.

The local community takes care of the monument.

A MASS GRAVE OF 93 RESIDENTS OF SZCZUROWA

MURDERED BY THE NAZIS

The plaque at the bottom of the cross:

OF 93 GYPSY-ROMA
DURING THE NAZI OCCUPATION

A PRAYER IN HOMAGE
FROM THE RESIDENTS OF SZCZUROWA

The plaque with the names of the victims:

The grave, the boulder, the cross – village residents; the plaque with the names of the victims: Krystyna Gil (survivor) i Lee-Elizabeth Hölscher-Langner (wife of the first Consul General of the Republic of Germany in Cracow)