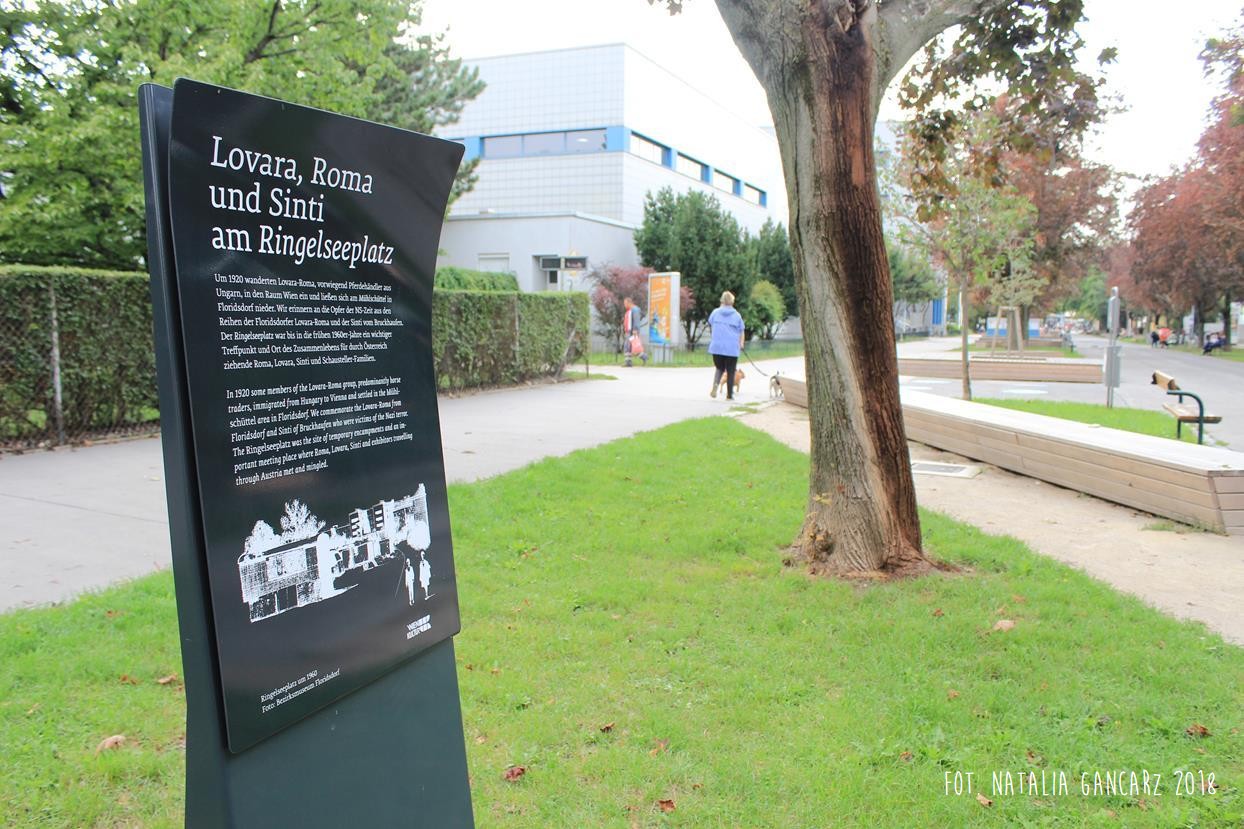 Vienna’s 21st district had attracted Gypsies of various groups before, but it was recorded that in 1920 many Roma arrived in the city, especially the Hungarian Lovari, who traded in horses. The inter-war period and the beginning of World War II was the time during which the Roma and Sinti’s right to free movement was increasingly restricted, so their presence in Vienna was almost exclusively in the Bruckhaufen area of ​​Floridsdorf. In 2001, three places related to Roma and Sinti: “Romaplatz”, “Sintiweg”, „Lovaraweg”, received their names. They are located close to the Old Danube and constitute a recreational area, available for those who want to relax outdoors.

Most Roma and Sinti who had stayed in Vienna before the war were deported and killed. The place names: the Roma Square, the Sinti Road, and the Lovari Road commemorate the presence of Gypsies in this area in the period preceding their extermination.

The Old Danube was a popular meeting place for travelling caravans of the Roma and Sinti. Also in the post-war years, the Roma who arrived in Vienna camped in this area, for example on the opposite side of the old river bed, near the Ringelseeplatz sports complex (e.g. Roma from former Yugoslavia in 1956 and others). In 1963, a group of school buildings were constructed on the site of the Gypsy camping site.

In 2016, a Lovari named Willi Silvester Horvath, in consultation with several Roma associations, began efforts to erect a memorial in Floridsdorf. Ultimately, in 2018 the monument was unveiled at Franklinstraße, near the intersection with Prißnitzgasse. The unveiling ceremony of the stele, whose form resembles an information board more than a monument – was attended by Nuna Stojka (the daughter of the artist Ceija Stojka who died in 2013, known for her Holocaust theme paintings), while the musical setting was provided by the group Amenza Ketane, whose star is Hojda Stojka, the son of the aforementioned Ceija.

The stele is located on a green belt adjacent to the part of the Franklinstraße pedestrian zone. It is a metal plinth in the form of a narrow plate, slightly expanding at the bottom for stability (visible from the side). A metal plaque with texts in German and English is mounted on the black stele. The upper right corner of the plaque is bent down.

Although not a typical information board, the stele with the plaque is also not a typical form of commemoration. It lacks the character of a memorial and it looks more like the result of an advertising agency project rather than a place of memory. However, according to the inscription, the intentions of the initiators were clearly to commemorate the Sinti and Roma who died during World War II. This advertising association is difficult to avoid when looking at a reproduction of a 1960 photograph showing Gypsy wagons on Ringelseeplatz square, which was placed under the inscription.

Probably the initiators failed to explain it clearly to the actual builders of the memorial that their objective was to commemorate the Sinti and Roma who were killed during World War II, and not those (from completely different groups) who arrived in Austria from south-eastern Europe in the 1950s and 1960s and camped on the opposite side of the Old Danube, in the area where the memorial was erected.

In 1920 some members of the Lovari-Roma group, predominantly horse traders, immigrated from Hungary to Vienna and settled in the Mühlschüttel area in Floridsdorf. We commemorate the Lovari-Roma from Florisdorf and Sinti of Bruckhaufen who were victims of the Nazi terror. The Ringelseeplatz was the site of temporary encampments and an important meeting place where Roma, Lovari, Sinti and other travellers who were passing through Austria used to meet.

Franklinstraße, the green belt near building No. 24, Vienna