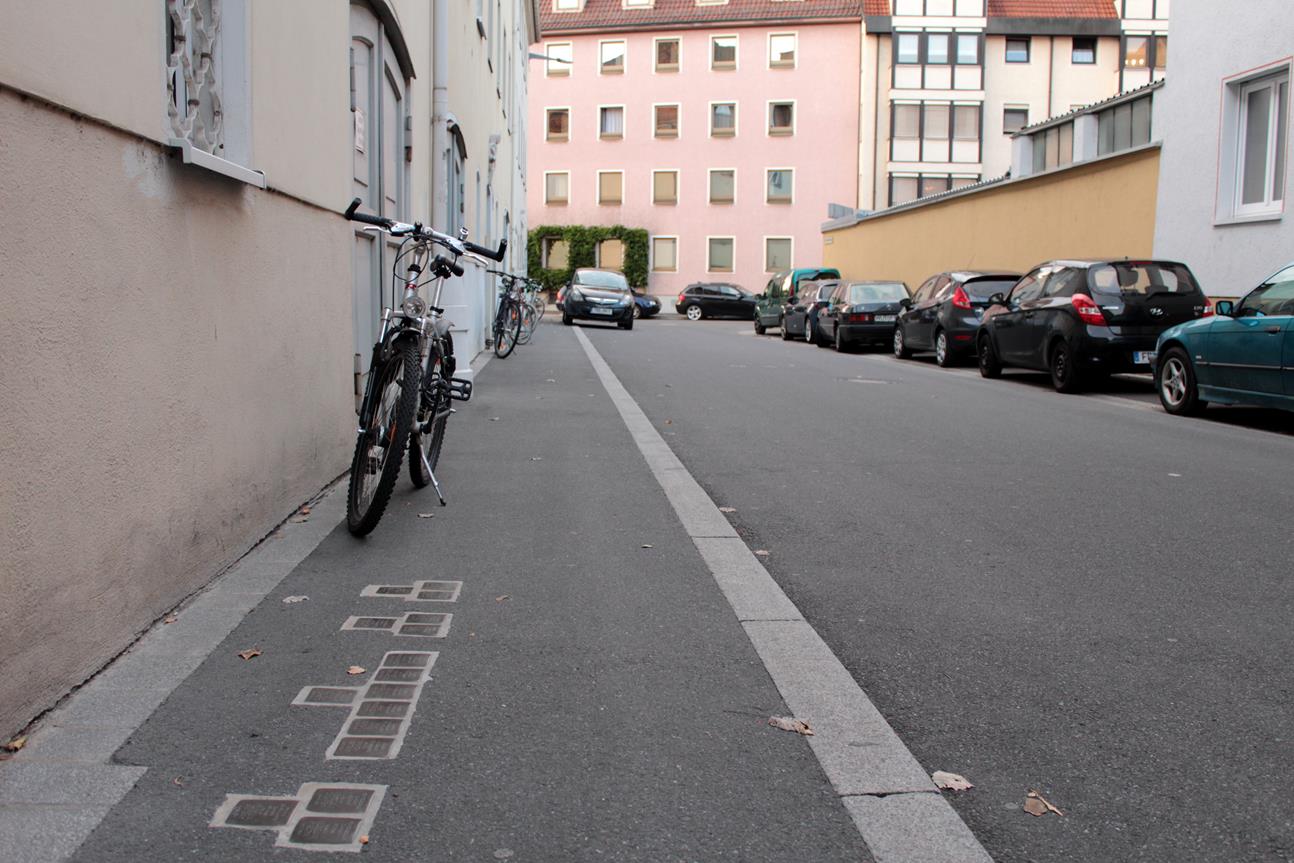 Right by the wall of the house at number 6 at Am Pleidenturm, where the Gypsies lived before the war, there are stumbling stones (stolpersteine), Memorial Stones, by Gunter Demnig, installed there in various years. The action of commemorating those murdered during World War II has been carried out by the artist in Europe (mainly in Germany) since the 1990s. Each of the brass plaques on top of 10-centimetre paving stones features the name and dates of birth and death, also the place of death (if possible). In this case, because the roadside is covered with asphalt bicycle path – brass plates are probably embedded directly in the asphalt without the use of stone cubes.

The author has placed Memorial Stones dedicated to Roma and Sinti from Würzburg also in other locations where they lived.

Wilhelmine Heumann and her three daughters were sent to Auschwitz on 23.03.1944. The date of the deportation of her three sons remains unknown. All of them were probably murdered shortly after arriving at KL Auschwitz.

Anneliese Winterstein worked as a washer and iron saleswoman at Edelweiss company in Würzburg. She was reported by her employers because she left work without notification. During an interrogation by the Gestapo, she testified that her absence was justified because she had to help her sister after childbirth. From March 23, 1943 to April 5, 1943 she was imprisoned for “unlawful absence from work”. On February 11, 1944, she was arrested again “preventively”. Together with her sons, four-year-old Karl-Heinz and seven-month-old Waldemar, she was deported to Auschwitz on April 5, 1944. She was selected to be a camp prostitute. Two months later, on June 12, 1944, she threw herself on an electric fence.

Sieglinde Winterstein, together with her siblings, Elizabeth and Karl, were half-blood Gypsy children. Parents could not get married due to one of the parents’ ’impure’ blood. Sieglinde’s mother, along with Sieglinde and her brother Rigo, who was several months old, were deported to Auschwitz in December 1943. Shortly afterwards, at the end of March 1944, Sieglinde’s sister Elizabeth with her grandmother met the same fate. Elizabeth had managed to avoid the first deportation due to scarlet fever. Sieglinde died in KL Auschwitz on April 11, 1944. The dates of her siblings’ death remain unknown. Sieglinde’s mother – Karoline and grandmother – Elisabeth survived Auschwitz, they were transported subsequently to Ravensbrück, then to Mauthausen and Bergen-Belsen. While grandmother probably died of typhus just after liberation, in May 1945, Karoline returned with the rest of her surviving family to Würzburg in the summer of 1945.

Rolanda Winterstein, born on March 03, 1943 in Würzburg
murdered on April 11, 1943 at Medical University in Würzburg

Rolanda Winterstein and her twin sister were born on March 3, 1943 in Würzburg. Their mother was allowed to give birth to children only on condition that  after birth she would give them away for experimental purposes in the study of twins at the National Institute of Inheritance and Racial Hygiene. This allegedly saved both parents from deportation to a concentration camp. Four weeks after delivery, the girls were transported to the University Hospital of Würzburg. There prof. Dr. Werner Heyde, professor of psychiatry and neurology, head of the Psychiatric Clinic of the University of Würzburg, Standartenführer and head of the medical department of the euthanasia centre in Berlin, used them to conduct pseudoscientific experiments, similar to those that Josef Mengele performed at Auschwitz. The experiments included attempts at changing eye colour from brown to blue with injections. After a few days, the mother managed to find her children, but she found Rolanda in the bathtub, dead, with a bandaged head. Rolanda was the youngest murdered Gypsy girl from Würzburg. She died on April 11, 1943. The second girl was found alive, but her further fate remains unknown.

Franz Winterstein, born on October 4, 1909 in Eusserthal
shot on September 7, 1942 in Würzburg

Franz Winterstein was the third son of Johann Winterstein. He earned a living as a basket weaver. In 1941 he served in the Artillerie-Ersatz-Abteilung 114. In March 1941, a Gestapo official in Würzburg asked the division command whether there were any Gypsies and half-blood Gypsies. He received a confirmation, which resulted in the discharge of Franz Winterstein on July 07, 1942. In September he was detained by the Gestapo, but tried to resist and escape. During this attempt he was shot.