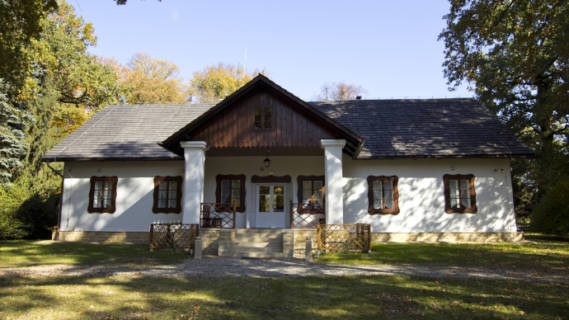 Manor House Museum in Dołęga, one of the branches of the District Museum in Tarnów, is located in a wooden, larch originally, manor erected in 1848 for its first owners: Maria and Aleksander Gunter.

In the 70s of the 20th century, the last owner of this manor and the estate, Jadwiga Wolska Tumidajska, commenced her attempts to turn her house into a museum. The Manor House in Dołęga was first opened to the public in 1981 after several years of renovation and restoration works.

Current decoration of interiors refers to the second half of the 19th century. The front part of this manor plays a representative role: here, similarly as presently, there was a drawing room, in the middle area there was a dining room and a study next to it. The eastern wing of this manor served initially as bedrooms and the western wing as a kitchen and a pantry.

Historically, this manor was connected with such events as the Peasant Uprising of 1846, the January Uprising and World War II. At the turn of the 20th century, the Polish cultural and scientific elite often visited the Manor in Dołęga: Adam Asnyk, Stanisław Wyspiański, Lucjan Rydel, Prof. Michał Siedlecki and others.

During World War II, the Manor actively participated in the resistance movement and its last owner was a member of the Home Army. Several kilometres from the Manor, there was an airstrip called “Butterfly” where such operations as “Bridge II” and “Bridge III” were conducted, aimed at removing from Poland certain fragments of V-2 missile and scientific studies related thereto.

The Manor House Museum in Dołęga has an extensive educational offer for children and young people, focusing on its history. It is also known for classical music concerts that are regularly organised here – this tradition was initiated by its curator, Władysław Konieczny.

On 13th October 2018, there was an official opening ceremony of this building after the completion of its renovation. The renovation of this building was performed under the project called “SKANSENOVA – System care in Malopolska heritage museums in the open air” implemented under axis 8 of the Operational Programme Infrastructure and Environment 2014-2020.