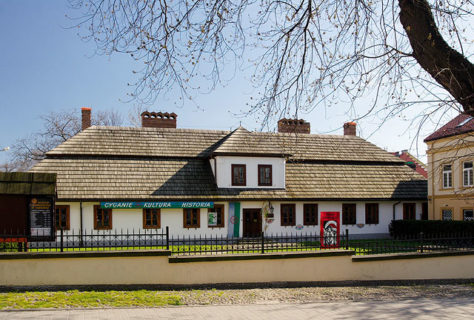 The Ethnographic Museum, Department of the District Museum in Tarnów, has been functioning in its present seat since 1984.

This is a classical and historical manor house with old garden and two-floor granary built at the end of the 18th century. The beginnings of the Museum’s operations were based on a small ethnographic collection which currently consists of more than 5,000 items. Among them, the most prominent ones are the exhibits that characterise the traditional folk culture of the Tarnów region. Apart from the exhibits mentioned above, the Museum collects items connected with the life and culture of the Romani. In 1990, the first in the world permanent exhibition devoted to the subject of the Romani was opened here. In the Museum’s yard, there is also a seasonal field exhibition installed called “The Gypsy Caravan”.

The Museum’s exhibitions take various forms and refer to various subjects. Those are exhibitions presenting not only the traditional culture of our Tarnów region in all its forms but also the cultures of various nations. The Museum presents also exhibitions that are outside the canons of ethnographic exhibitions, like exhibitions connected with man and his surroundings, social movements and contemporary artistic works. Exhibitions that are prepared by the Museum’s employees are also very popular (“In Granny’s House” – (pl. “W babcinej izbie”), “Annual customs in the region of Tarnów” – (pl. “Doroczne obrzędy w regionie tarnowskim”), “Give us this day our daily bread…” – “(“Chleba naszego…”), “Polish Icarus” = (pl. “Polski Ikar”), “Time to go” – (pl. “Czas odejścia”), “Vanishing crafts” – (pl. “Ginące rzemiosla”), “Folk experience of the Passion” – (pl. “Ludowe przeżywanie pasji”), “Easter Mystery in the arts” – (pl. “Misterium wielkanocne w sztuce”), “Fear has magnifying eyes” – (pl. “Strach ma wielkie oczy”), “Written Sacrum” – (pl. “Pisane Sacrum”)…)

Another form of the Museum’s activity is the organisation of competitions aimed not only at collecting new items for the Museum but also promoting the traditional folk culture of our region. Here, the Painted Cottage Competition (pl. “Konkurs Malowana Chata”) is definitely worth mentioning, which currently is the oldest competition as regards folk art in Poland, and the “Easter Egg and Easter Ceremonial Art Competition” (pl. “Konkurs na Pisankę i Plastykę Obrzędową związaną z Wielkanocą”) which is considered to be the biggest competition gathering artists connected with traditional ceremonial arts (main organiser – MCK Sokół, Organisational Office in Tarnów).
The Museum conducts field studies on an ongoing basis, verifying the status of our traditional folk culture, collecting new museum items at the same time, and oversees the Folk Artists Association Department in Tarnów.

Our educational activity is also one of the Museum’s many tasks, aimed at strengthening the sense of regional identity, preserving our regional traditions, promoting various forms of folk culture and teaching how to discern the beauty of human feelings.

Since the establishment of the Ethnographic Museum, museum classes and art workshops have been organised.