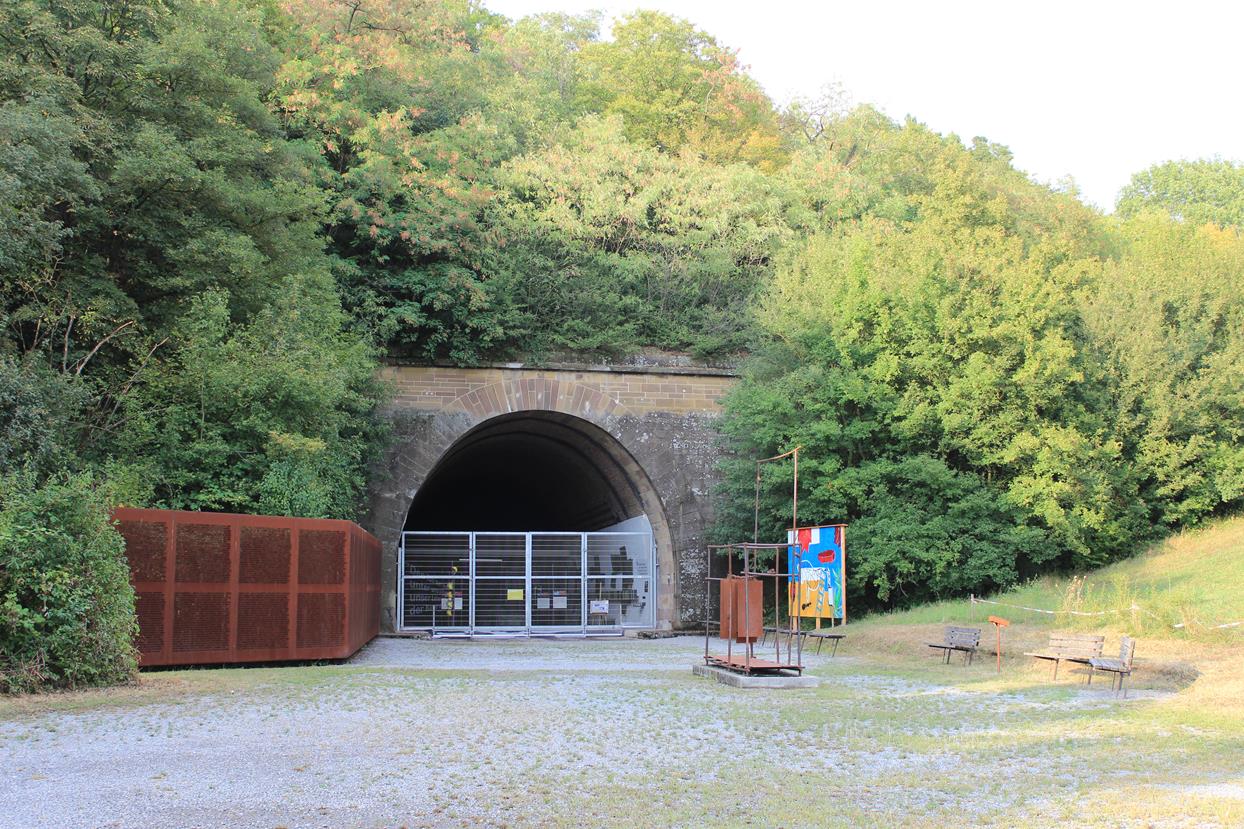 From spring 1944 to April 1945, in the upper part of Seestraße there was an SS concentration camp – as a satellite camp of Alsatian KL Natzweiler-Struthof. It was fenced with barbed wire and its area was secured by watchtowers. Prisoners from 24 European countries were detained in the barracks, mainly from Poland, the USSR, France, Hungary, the Balkans and Germany. Many of the prisoners were Jews, but there were also the Sinti and Roma. Initially, several hundred prisoners lived and worked here, at the end of the war there were over 3,000 of them.

The prisoners worked almost exclusively for Presswerk Leonberg, a company belonging to the Messerschmitt AG Works in Augsburg – in the tunnel which they were building.

In April 1945, machines were removed from the camp because of approaching French soldiers. At Blosenberg – the other end of the camp – a mass grave was organised for prisoners who died because of the catastrophic conditions of imprisonment and labour.

There is a historical trail in the city – a memorial trail dedicated to the victims of the camp.

At the entrance to the tunnel there is a memorial dedicated to the victims of KL Leonberg. It consists of two Corten steel constructions: a 25-meter wall with 3000 names on 15 panels (3×1.5 m each) and plaques hanging on a special steel structure on which the names of prisoners were also carved. The latter were made under the supervision of the artist Johannes Keres, children and youth, during workshops aimed at commemorating the victims of the camp.

Among the names inscribed on large panels of steel, we can find the names of Sinti and Roma (e.g. Gottlob Reinhardt), but the presence of the Roma and Sinti in the camp is not mentioned on the memorial in any other way. This is due to the concept of the memorial, all names, as names of prisoners, were equated – no one knows their nationality. We only know that they came from 24 countries.

The first panel features inscriptions in Polish, German, Italian and French (“They did not have names and surnames, they were only numbers: / over 3000 men from 24 European countries, / deported by fascists, / handed over to the SS in a concentration camp in Leonberg, / in 1944/1945 forced by Messerschmitt to work / at manufacturing the ME 262 fighter, / worked twelve hours a day, seven days a week. / 398 prisoners died in the Leonberg concentration camp, / many more perished in death camps and death marches.”). The last plaque also contains the names of 16 Gestapo prisoners and those working outside the camp and an inscription in German: “Und hunderte, deren namen wir nicht kennen” (“And hundreds of those whose names we do not know”) …

In the old tunnel, in which Messerschmitt workshops were located, there is also an exhibition dedicated to the history of the camp, but this is a private initiative of the association and you can rarely see it (we did not succeed).

Historical photographs from the tunnel: https://www.kz-gedenkstaette-leonberg.de/galerie/details/bilder/historische-fotos-von-tunnel-und-lager/