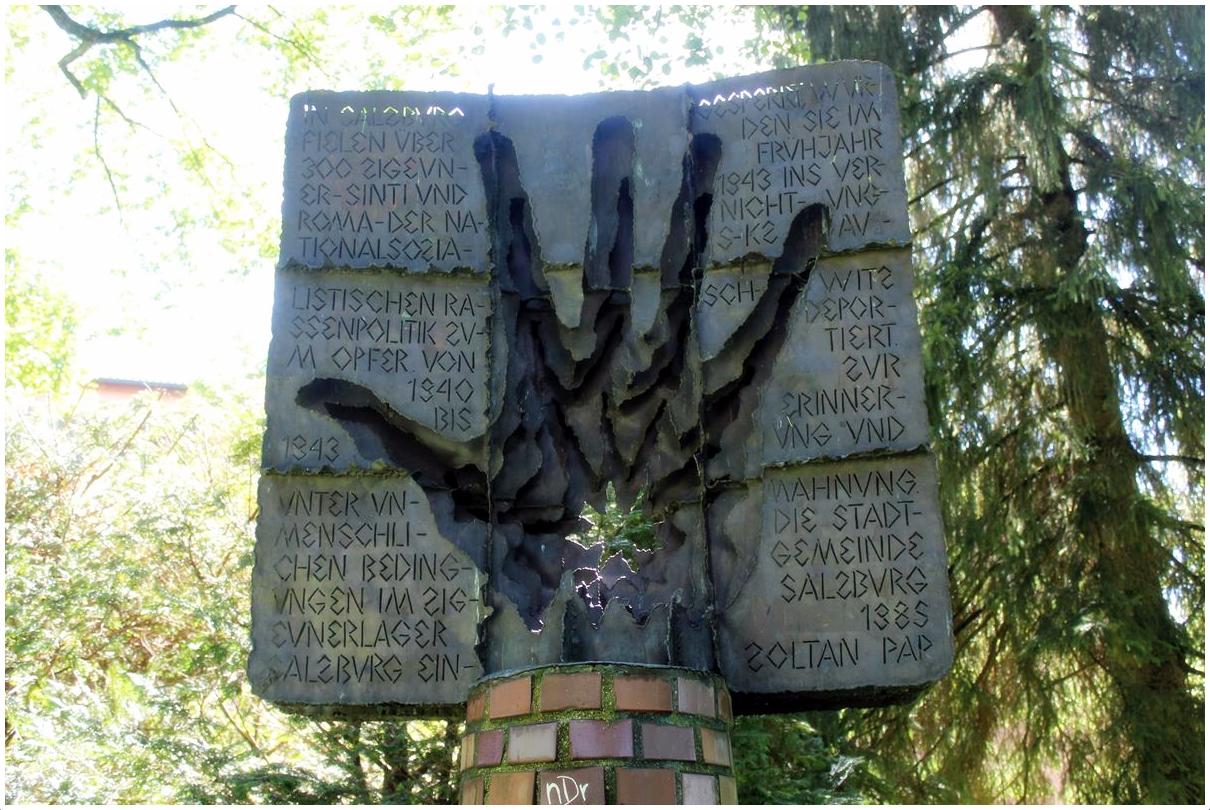 Over 300 Roma from Salzburg, Tyrol, Upper Austria and Carinthia (southern Austria) were imprisoned in the Maxglan camp in Salzburg in the years 1940 – 1943. The camp area included Trabrennplatz, the former city racing track, near today’s Ignaz Rieder Kai street, where the temporary labour camp for Roma and Sinti was located. The prisoners performed forced labour connected with the regulation of the River Glan, building motorways and constructing Glasenbach barracks. They were also used as extras in the making of films by the German director, propagandist, Leni Riefenstahl. Of the 51 male extras involved in the film “Tiefland”, which was shot in Krünn in Mittenwald, 25 were sent to Auschwitz, 3 to Ravensbrück, 14 to Lackenbach, 2 died in the Maxglan camp, and the fate of the remaining 7 remains unknown.

In the spring of 1942 the remaining prisoners of the Maxglan camp were eventually deported to Auschwitz-Birkenau.

In 1945 the Maxglan camp was completely destroyed, and then its area underwent redevelopment. This fact was one of the reasons that influenced the location of the monument erected in the 1980’s. The location on the grounds of the former transit camp, aroused controversy among local residents, as in the meantime a playground for children from nearby blocks was built on this area. Eventually, the monument stands within the fenced playground, on the left, but there is a space which separates it from the playground itself.

The monument comprises two parts. The pedestal is shaped like a round, brick crematory chimney. Above it, there is a construction consisting of five metal plates, inside which palm-shaped holes are carved – the last plate has a tiny hole in the shape of a child’s hand. The hand is supposed to symbolise a sign of protest, but it is also a symbol of the cruel mutilation of the Roma people.

In addition, around the palm of the artist separated six tablets on which he placed inscriptions.

Additionally, the author of the monument placed six plaques with inscriptions.

(In Salzburg, over 300 Gypsies – Sinti and Roma – were killed as victims of the national socialist racial policy. From 1940 to 1943 they were detained in inhuman conditions in a camp for the Gypsies in Salzburg, and in the spring of 1943 they were deported to the Auschwitz death camp. As a memorial and as a warning. Salzburg city community. 1985 – Zoltan Pap)

The scene with the Sinti: https://www.youtube.com/watch?v=TL7rx-VklQQ