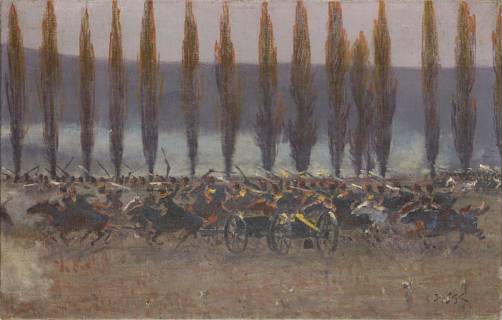 When the Polish people presented the Racławice Panorama in Budapest, it was seen by thousands of Hungarians who, fascinated with such a large painting, became desirous to have a similar one but connected with their own history.  Therefore, the painting of panorama was commissioned to Jan Styka and it was to present one of important events during the Hungarian Revolution of 1848-1849. This work was to be finished for the 50th anniversary of the outbreak of this uprising (1898). It was agreed that the subject of this painting would be the seizure of Sibiu on 11th March 1849 by the Hungarian insurgents led by Gen. Józef Bem.

The works on the “Transylvanian Panorama”, measuring fifteen meters in height and one hundred and twenty meters in perimeter, were commenced in the rotunda in the Stryisky Park in Lviv on 20th April 1897 and lasted five months. An international group of artists participated in this extraordinary and implemented at a breathtaking speed project. Apart from the ones mentioned earlier, the following people also took part in this project: Béla Spányi from Hungary who painted the landscape, Leopold Schonchen from Germany – an expert on vast areas of the sky and from Poland – Zygmunt Rozwadowski, a painter of battle scenes, Tadeusz Popiel, Michał Wywiórski – a naturalist painter. The audience – residents of Lviv saw the Panorama as the first ones, its presentation was a great event.

At the end of the year, the painting was folded and transported to Budapest. The ceremony of unveiling the Panorama took place in March 1898 on the 50th anniversary of the outbreak of the Hungarian Revolution against the Austrians. Budapest was visited by Hungarians even from remote areas, their patriotic spirit was high.

Despite great interest, promotion campaign, sale of publications and colour lithographs, the proceeds did not cover the costs of painting this work of art. As he could not see any chances of receiving his remuneration agreed with his employers, Jan Styka folded the painting and moved it to Galicia in 1900. In 1907, the Panorama was displayed to the audience for the last time, this time in Warsaw in the rotunda located at Karowa Street.

Jan Styka decided to cut his work into fragments, they were framed and sold. We do not know how many fragments the Panorama was cut into. The fragments that exist indicate that the painting was cut in such a way so as to obtain rather separate works of art.

Sometimes they are corrected, repainted. For example, the beautiful fragment with a Hungarian hussar on a horse gained the horizon and a sunset in the background (originally there was a hill slope), in another fragment there was a hat remaining between the legs of a horse, belonging to the person standing below, so it was painted over, similarly in the fragment where there are caravans, the rider that was cut in half was painted over, only a horse standing next to the wagon was left.

As a result, a collection of new paintings in various sizes was created. All paintings were signed, usually the signature of Jan Styka is in the right bottom corner of the canvas.

By the moment this exhibition was opened, 38 paintings remaining after the famous Panorama had been identified. Three fragments are known only from pre-war reproduction and it is not certain whether they have survived to this day. For some of the paintings, their locations/owners have been identified and some of them are known only from pictures, for example placed in auction catalogues.

Currently, the Tarnów Museum has twenty paintings (one of them is a deposit).