Regional Center for Education about Remembrance 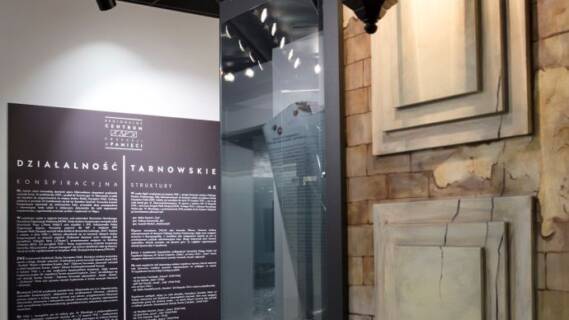 This is a new branch of the District Museum in Tarnów, which was established on the grounds of the former Memorial Chamber of the Home Army.
The permanent exhibition at the Regional Center for Education about Remembrance is devoted to the aspects related to World War II. It commemorates the history, tradition and combat effort of two “Tarnów” regiments: the 16th Infantry Regiment and the 5th Mounted Rifle Regiment.
The exhibition highlights the atrocities of September 1939 and the subsequent German occupation of Tarnów and the region. It shows the living conditions and heroic attitudes of the inhabitants who faced the enemy. It refers to the structures and conducted forms of underground activity. It recalls the biographies of important people and the events taking place in the area at that time, incl. the first mass transport of Poles to KL Auschwitz, Operation Wildhorn III, which resulted in the delivery of elements of Hitler’s secret weapon – V2 rockets to the West, or the battle at Jamna, the largest battle in this part of Poland during the Operation “Tempest”. The presented content is complemented by numerous objects, including: uniforms, weapons, photographs, documents and other, often unique, exhibits from the period of World War II.